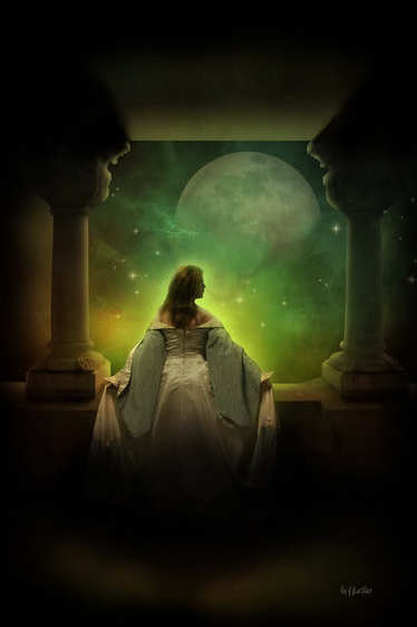 Princess Celine stood upon the balcony of her private chambers, watching through silent tears as the sun sent forth its penetrating fingertips - their honed talons determined to shred the remnants of night in order to unleash sun's full glory. Shivering as night's breath hissed with annoyance before darting off to devour another passage of time, Celine hugged her arms to herself, barely managing to retain the sob threatening to erupt from a deep-rooted ache.

Oh, how she longed to feel his arms about her once more; to feel his lips upon hers; his coarse hands on her tender flesh. How she adored him.

Celine could not imagine any fate worse than being separated from her one and only true love.

The echo of her young maid's voice saw Celine dry her tears, but she remained where she was, longing... aching... wanting...

Lula stepped out onto the balcony, remaining behind Celine as she spoke. Earnest concern laced her tone. "Mistress? It's cold out. Should you not be seated before the fire, if not wrapped in the coverings of your bed...?"

With a heavy heart, Celine turned to eye the monstrous bed with all its polished timbers and mass of silk coverings. "There is no place colder than in a bed without love, Lula. The longer I lay there, the emptier my world and arms seem to become."

"Oh, Mistress, Prince Koen shall soon return. You shall hold him in your arms before hope's end."

"Mistress, surely this cannot be. Prince Koen has been gone but seven days too long."

"Prince Koen," she told the rising sun, "has been absent no less than thirty-five days. The battle has been fought, the war ended, the land has been returned to our kingdom, yet, still he does not come. Men of his leading return, bringing forth no news of his whereabouts," she soberly relayed, her heart tripping over emotion, "but my love does not return. I am weary," she confessed, her head dropping for a moment before she inhaled deeply and returned to her chambers, where she cast off night's attire and stepped into the gown suitable for day's events.

As Lula assisted Celine in preparing for the new day, Celine announced, "Today I leave the castle."

"But, madam," Lula grieved, helping Celine into new day's gown, "your orders were to remain safe within the walls of the castle until the day of Prince Koen's return."

Celine grunted, willing Lula to tighten the straps of her gown before frustration broke free. "These walls have become my prison. Once my safe haven, once my chamber of love, this fortress is now an icy den of misery. Surely this is a reflection of hell: A world where love no longer resides... I must step free of these walls, Lula, and feel the sun upon my face, the grass beneath my feet, or life and hope may never again fill my soul."

Abruptly stepping away from Lula's grip, Celine demanded, "But nothing, Lula. If my prince returns then he shall return to a woman of strength, not brokenness. But these walls," she irately spat, all but cursing her surroundings as she waved her fists about her, "shall see me undone. If my prince returns," she determined, a mixture of dread, loneliness, frustration and determination tumbling forth in the form of thick, but silent, tears, "then he shall find me as he left me... but if not--" she faltered, struggling to silence intense fear as she caught her breath, "then I shall find strength and go in search of him. Either way, these walls will hold me no more."

"Enough! Go now! Order James to prepare my horse immediately... I ride out this day...!"