7 So, as the Holy Spirit says:
‘Today, if you hear his voice,
8     do not harden your hearts
as you did in the rebellion,
during the time of testing in the wilderness,
9 where your ancestors tested and tried me,
though for forty years they saw what I did.
10 That is why I was angry with that generation;
I said, “Their hearts are always going astray,
and they have not known my ways.”
11 So I declared on oath in my anger,
“They shall never enter my rest.”’

12 See to it, brothers and sisters, that none of you has a sinful, unbelieving heart that turns away from the living God. 13 But encourage one another daily, as long as it is called ‘Today’, so that none of you may be hardened by sin’s deceitfulness. 14 We have come to share in Christ, if indeed we hold our original conviction firmly to the very end. 15 As has just been said:

‘Today, if you hear his voice,
do not harden your hearts
as you did in the rebellion.’

16 Who were they who heard and rebelled? Were they not all those Moses led out of Egypt? 17 And with whom was he angry for forty years? Was it not with those who sinned, whose bodies perished in the wilderness? 18 And to whom did God swear that they would never enter his rest if not to those who disobeyed? 19 So we see that they were not able to enter, because of their unbelief.

Can you imagine walking through the wilderness for 40 years?

Imagine walking around the same mountain, whingeing and complaining, and suffering all sorts of discomforts for FORTY YEARS!!!

You couldn't imagine tolerating that these days, ay. Not in this fast-service, gotta-have-it-yesterday world we live in. These days we'd call a cab, jump on a plane or head off to a new destination if we couldn't get what we wanted fast enough. Whatever gets us there, or somewhere, or ANYWHERE!!! fast - that's what we want. No matter what the cost!

Of course, if we can't get the cab or plane or train or even skates to our chosen destination we won't bother going there and we'll miss out on the dream, but, hey, settling for 'ANYWHERE!!!' or 'anything' is better than having to wait alllllll thaaaaat tiiiiime for 'the dream', isn't it...!

Many times we'll not just give up on the destination, or the dream, or God's promises, though; but on Him, too. We want what we want and we want it when we want it and if we don't get it we'll grumble and groan until we do or we'll talk ourselves out of wanting 'that' and go after something new; something else that will gratify our flesh asap! No matter what the cost!

Those in the above verses, who didn't make it out of the wilderness, died in their grumbling, and God passed 'the promise' on to the next generation... Sad, ay.

What is your dream...? His promises to you?

What is your wilderness? What is it you're grumbling over? In what way are you being disobedient and, because of this, cannot seem to enter God's rest, or peace? What have you hardened your heart over?

Do you seriously want to spend the next 40 years or so wandering aimlessly around the same mountain? through the wilderness? missing out on God's promises and on your dreams?

Is impatience, grumbling, unforgiveness, and so on, really worth losing the dream, the promises, peace/God's rest and God over...? 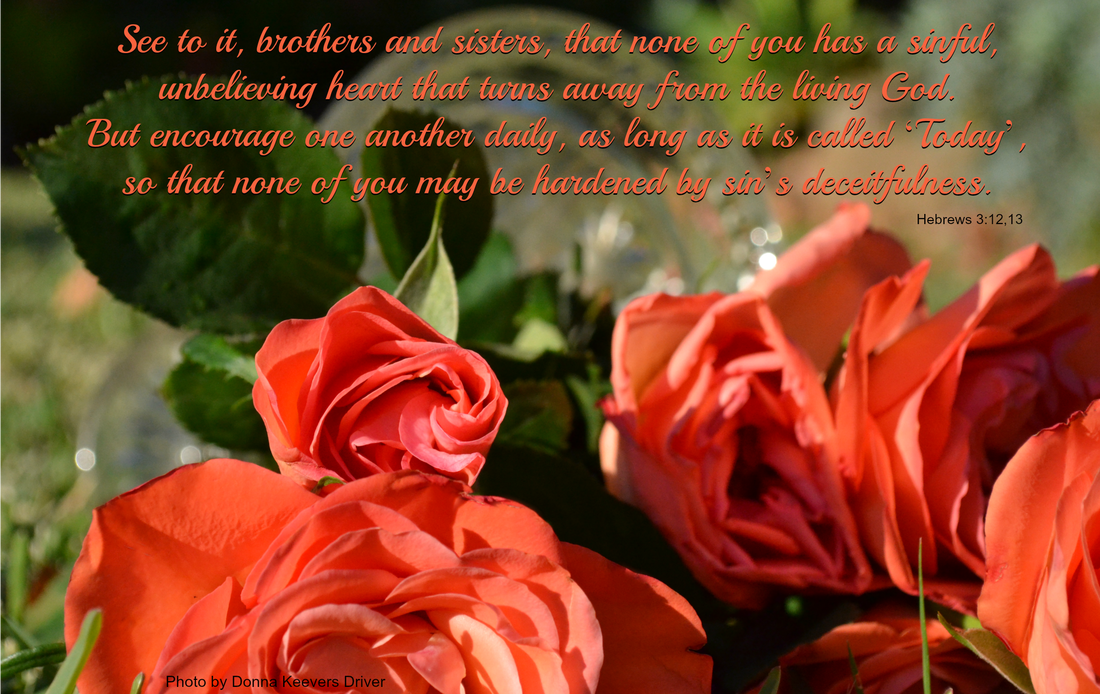 Last week I was at the point of giving up on my marriage. I was over it. I had been walking the 'Finding Our Identity' walk over on my main website, and, in the midst of it - while having to deal with my ego - I got fed up with man's ego, and couldn't be bothered pampering it anymore, so much so that my heart was hardening and my love for my husband was cooling off pretty darn quickly...until I surrendered my heart to God.

The flowers in the image above were given to me by my husband - along with a cross necklace. He left them for me, on my desk, while I was out - before he had to go to work. He gave them to me the night after he found a bit of jealousy in his heart and I found it in my heart not to care. We didn't argue; rather, I bit my tongue and he just gave 'that look' that declared he was not pleased.

With Tim's heart threatening to harden, and with mine calling for that cab mentioned above, I hissed at God, "Of all the times for this to come against me!!" then He echoed back, ever so patiently, and, like me, referring to the 'finding my identity' journey and the ego-dealing section of it, said, "Of course this would come against you at this time..." and then I knew it was the enemy trying to hinder my journey, and my marriage, and I laughed, knowing I should've expected it.

Unfortunately, I laughed in my husband's face. Poor timing, I know, but, hey, God turned it for good. :) My anger slipped away and we discussed the issue more openly and with less tension... At the end of our conversation, with new understanding laying on the table between us, Tim said, "You know what this means, don't you?" to which I replied, "Yes, this is the moment we allow God to turn our marriage around..." and we did; seeking His heart, His will, His way... and our hearts softened and love returned - no cab necessary. But in our own strength, in our own ego, with our hearts hardening, the story would've had a completely different ending...


1 Oh come, let us sing to the Lord!
Let us shout joyfully to the Rock of our salvation.
2 Let us come before His presence with thanksgiving;
Let us shout joyfully to Him with psalms.
3 For the Lord is the great God,
And the great King above all gods.
4 In His hand are the deep places of the earth;
The heights of the hills are His also.
5 The sea is His, for He made it;
And His hands formed the dry land.


6 Oh come, let us worship and bow down;
Let us kneel before the Lord our Maker.
7 For He is our God,
And we are the people of His pasture,
And the sheep of His hand.


Today, if you will hear His voice:
8 “Do not harden your hearts, as in the rebellion,[a]
As in the day of trial[b] in the wilderness,
9 When your fathers tested Me;
They tried Me, though they saw My work.
10 For forty years I was grieved with that generation,
And said, ‘It is a people who go astray in their hearts,
And they do not know My ways.’
11 So I swore in My wrath,
‘They shall not enter My rest.’”